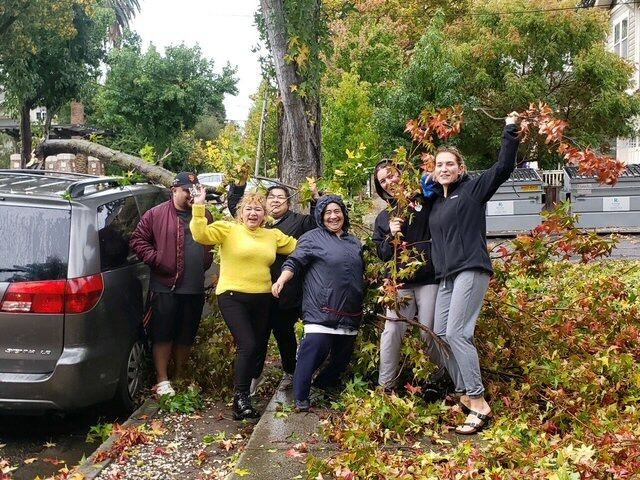 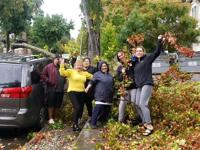 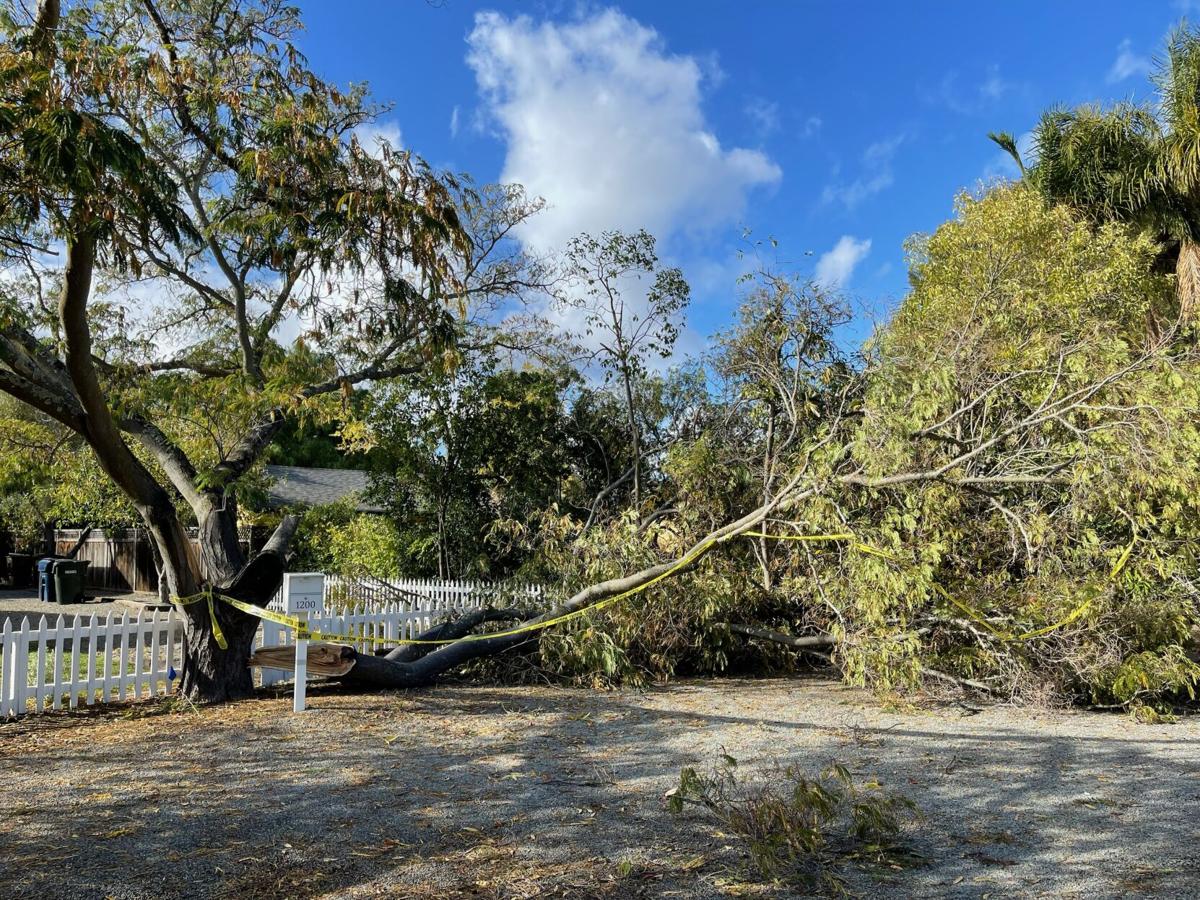 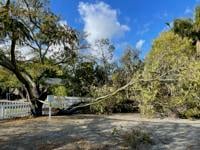 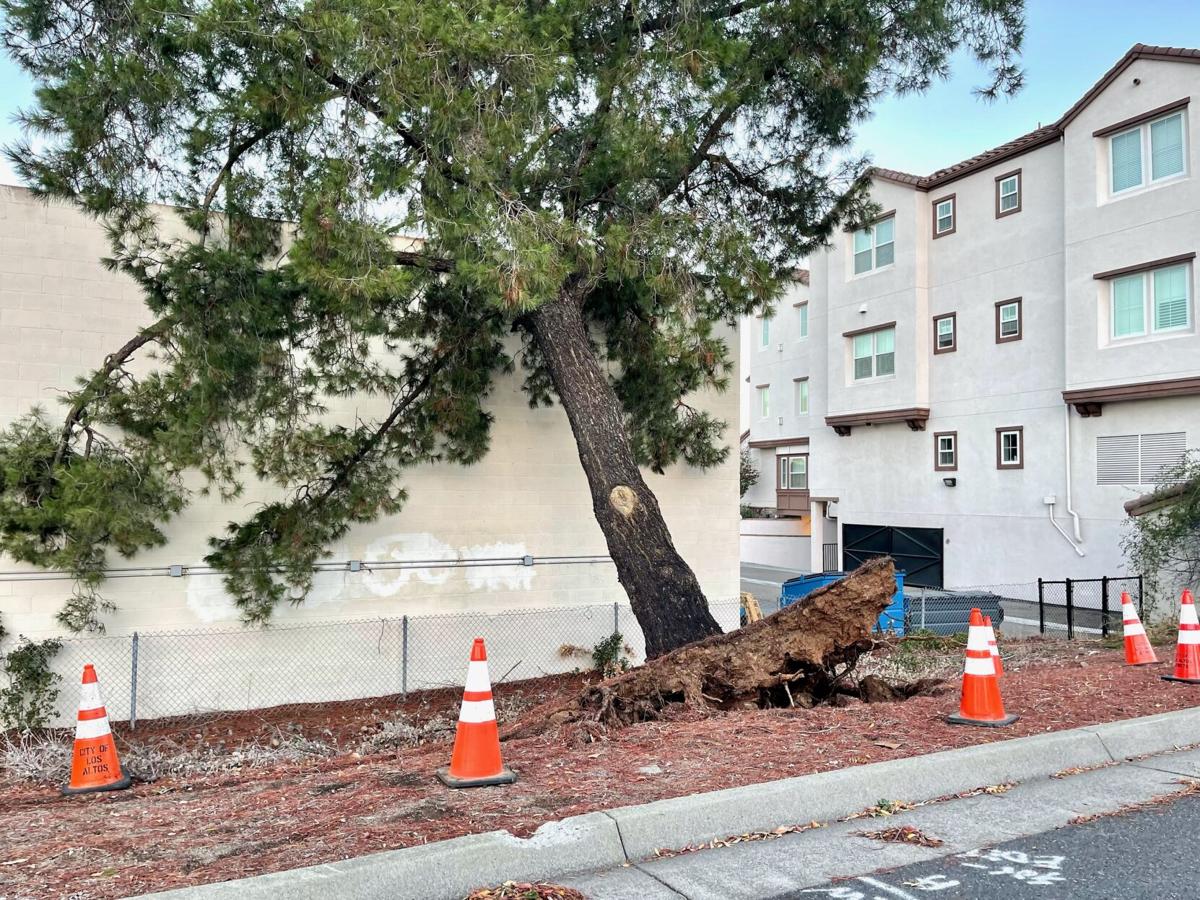 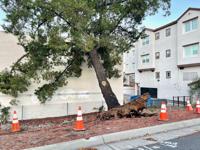 This tree along Foothill Expressway in downtown Los Altos appears pulled right out of the ground.

This tree along Foothill Expressway in downtown Los Altos appears pulled right out of the ground.

The 4.02 inches of rain recorded at San Francisco International Airport Sunday (Oct. 24) drowned a previous daily precipitation record of 0.74 inches set in 1998, according to the National Weather Service.

In San Jose, the NWS recorded 1.42 inches of rain Sunday, bringing the monthly total to 1.63 inches; 0.35 inches is considered a "normal" total for the month through Oct. 24.

As of approximately 11 a.m. Monday (Oct. 25), 10,083 PG&E customers in Santa Clara County were still without power, including 308 in Los Altos, 463 in Los Altos Hills and 464 in Mountain View, according to a company spokesperson.

Across the state, approximately 380,000 PG&E customers – 7% of the utility’s 5.5 million customers – lost power since the early hours of Sunday morning, wrote Jason M. King, of PG&E’s marketing and communications department, in an emailed statement. As of 6 p.m. Sunday, crews had managed to restore power to approximately 250,000 customers.

Reported issues included electrical problems, vehicle crashes and even an elevator rescue, and some took hours to address.

“Especially when trees come into contact with electrical lines, this requires SCCFD for safety, law enforcement for traffic control, public works to deal with the downed tree, and PG&E to address their poles and shut down power to the area,” Stockman wrote in an email to the Town Crier. “This requires a lot of coordination and can be time consuming, especially for PG&E and public works (departments).”

Heavy winds toppled trees and limbs in Los Altos, Los Altos Hills and Mountain View, but no injuries were reported, according to the cities’ respective law enforcement agencies. In the Hills, one incident on El Monte Road involved a large eucalyptus tree that fell on a moving sedan.

On Monday, Los Altos Hills residents used the town’s version of SeeClickFix, an app for reporting nonemergency issues, to direct staff to at least three pathways obscured by fallen trees or storm debris.

“Our crews are doing the normal cleanup after storms, checking all drainage systems, removing broken branches or trees, cleaning storm drain inlets and any debris on the roads, and after that will be clearing the debris from the paths,” wrote Oscar Antillon, the Hills’ new public works director, in an email.

As the Lymans live at the bottom of a hill, their yard often becomes the receptacle for neighbors’ runoff during the rainy season, and they installed a sump pump in their pool house basement a few years ago to ensure the excess water doesn’t flood the carpeted floor. But at approximately 2 p.m., the Lymans discovered the pump was not working, and water levels were quickly rising.

Twinkie Lyman remembered a Los Altos Hills County Fire District Community Emergency Response Team meeting she once attended during which firefighters encouraged residents to call them for any emergency. So she did.

Although the Lymans’ generator had switched on during their power outage, a paramedic realized the pump control panel settings, located in the garage, were not in “automatic mode.”

“It was a mad rush in spite of it raining cats and dogs so everyone was drenched,” Twinkie said. “It was quite a scene. I can laugh now, but it wasn’t funny yesterday.”

Twinkie added that they are extremely grateful to the fire department.

“We were completely exhausting ourselves,” she said. “We’re 68 and 71, and I’ve just had two knees replaced. I can’t keep going up and down these stairs with buckets of water.”

Los Altos, Los Altos Hills and Mountain View will remain dry until at least Sunday, according to NWS forecasts.