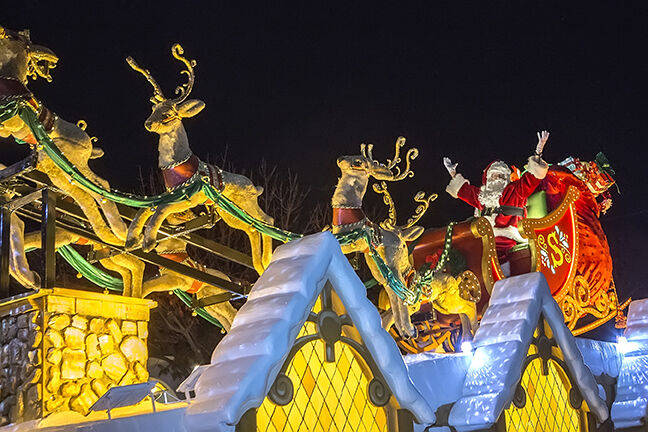 Ideal weather conditions and eased COVID-19 restrictions made for the return of a Los Altos tradition, the Festival of Lights Parade, held Sunday in downtown Los Altos. Entrants included the spectacular Santa float, above, and numerous costumed characters (next photo) from classic children’s fairy tales. 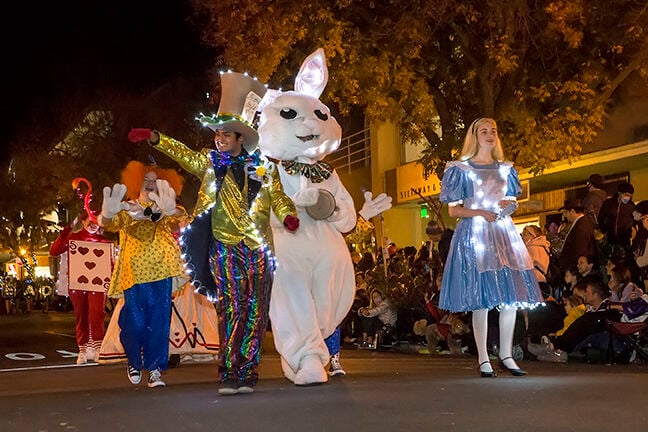 Ideal weather conditions and eased COVID-19 restrictions made for the return of a Los Altos tradition, the Festival of Lights Parade, held Sunday in downtown Los Altos. Entrants included the spectacular Santa float, above, and numerous costumed characters (next photo) from classic children’s fairy tales.

Los Altos’ Festival of Lights Parade returned Sunday night, powered by more than 1,000 participants and volunteers who gathered outdoors in beautiful weather for a latter-days pandemic version of the tradition begun in 1977.

An entire generation of local toddlers and preschoolers has languished in a parade-free world, courtesy of 2019’s unprecedented rainstorm closure and 2020’s surging COVID-19 crisis. The 2- to 3-year-old set had a look of particularly dazzled curiosity as twilight darkened and they wandered the parade-ready streets, periodically retreating from the roar of a Los Altos Police motorcycle.

Police and parade organizers reported a well-behaved crowd and smoothly run parade. The rule that no participants should stake out spaces along the sidewalk before noon on parade day was arguably even less acknowledged this year than in previous years, given the relatively narrow inventory of sidewalk left between restaurant parklets along Main and State streets. As of 4 p.m., the entirety of Main Street was lined with the skeletal shapes of empty lawnchairs, chalked outlines and picnic blankets, with intermittent figures – grandmothers appeared well represented – keeping solitary watch as they awaited the larger family.

Veteran parade fans had set up card tables loaded with hot drinks and picnics as the sun began to set. Outdoor dining reservations for those restaurant parklets lining the sidewalk had booked out well in advance, according to restaurant staff interviewed downtown in the hours leading up to the event.

Some restaurateurs appeared ruefully pleased to be booked out during what has been at times a very thin year – and at least one business, fully reserved and already hopping with assembling dining parties by 4:30 p.m., was charging $40 per person for the privilege of prime viewing

By the time the parade rounded State Street and started heading up Main, people were stacked five deep along the sidewalks. Women leaders were lit up in lights early in the parade roster, with a chorus of very young female voices hollering, “Hi, Mayor!” as outgoing Los Altos Mayor Neysa Fligor motored by with her daughter. A team of enterprising young people rushed from the wings to push Los Altos Hills Mayor Kavita Tankha’s vintage car with pure muscle power when their help was needed in front of Adventure Toys along Main Street.

“I like how it’s so colorful, musically colorful,” a Mountain View first-grader murmured as the glowing pipe organ sponsored by Heritage Bank passed by.

Glowing masks were a memorably 2021 addition to the parade lighting this year, with Marti’s Dance Studio glimmering in coordinated blue and the Union Middle School Marching Band in green, mask slits keeping the woodwinds and brass in action. Dartmouth Middle School and Fremont High School bands both demonstrated creative flair in ugly sweaters, a spectacle of colors, lights and coordination that after so long apart felt like unfamiliar magic.

“It was heartwarming to see the big turnout for the Festival of Lights Parade,” downtown resident Lizebeth Burch wrote in a letter to the Town Crier after the event. “Many thanks to the parade organizers, sponsors, schools, the city of Los Altos and town of Los Altos Hills, and all who worked so hard to make it actually happen this year. The huge audience was courteous and enthusiastic.”

Los Altos Police Chief Andy Galea reported two lost children who were quickly reunited with their parents, but no other notable incidents, and concluded that “people were very respectful of the guidance (for viewing the parade) from the event organizers.”

Galea’s department was out in full force for crowd and traffic control, but he also noted communications help from approximately 50 ham radio operators.

“It was a really calm, fun night without any big issues. ... I do think it was one of our better parades,” said Nancy Schneider, a member of the all-volunteer Festival of Lights Association, which plans and stages the event annually.

Although neither Schneider nor Galea had a precise estimate on this year’s attendance, Schneider said there appeared to be fewer attendees than in the pre-2019 era.

This year’s event was broadcast for the first time live on YouTube, Schneider said, with approximately 1,600 viewing online.