The Los Altos City Council passed a resolution in the early hours of May 26 aimed at mending a gaping political wound dividing the community over a dispute between an Asian-American council member and a local Black activist.

In an epic council meeting lasting past 2 a.m., replete with approximately 80 speakers, another 17 written comments, complaints of out-of-town interference and an emotional statement by Councilmember Lynette Lee Eng, the council voted 3-2 to “directly address this situation and the impact on the community.”

Council members sought to have the resolution state a sequence of facts to set the record straight, referencing the Nov. 24, council meeting from which the controversy stemmed. The resolution stated that its purpose was to respond to residents’ requests for “some form of closure on this issue.”

According to the resolution, Kenan Moos had texted Lee Eng after she asked about the cost of a police reform item at the November meeting. Moos, co-founder of the social justice group Justice Vanguard, texted Lee Eng, “Your name will be all over the papers.” Lee Eng read Moos’ text and reacted by publicly stating that she was receiving “racist texts from Justice Vanguard” and expressed concern for her and her family’s safety. Lee Eng’s response to Moos’ texts drew outrage from his supporters, who said the council member had criminalized Moos, a Los Altos resident. Moos further texted Lee Eng after her statement that he was not threatening her.

“This is me expressing my disappointment” (with her vote), he wrote.

Moos’ supporters have spoken at every council meeting since, calling for Lee Eng to apologize or even resign. Lee Eng’s backers said the council member was being bullied and was a victim of “cancel culture.”

The issue made national and international headlines last week with stories on the Daily Mail and Fox News websites focusing on Lee Eng’s perspective. The stories triggered social media attacks, and Moos said he has received death threats.

A large number of the speakers at the meeting, which began the night of May 25, expressed support for the council resolution, even as Lee Eng’s backers railed against the proposed wording. Supporters included a group of former council members, including Jeannie Bruins and Jan Pepper, who were at the Nov. 24 meeting.

Fligor emphasized that the resolution was neither taking sides nor criticizing anyone. But Lee Eng said it was biased against her by stating some facts and omitting others. Enander noted, for example, that Lee Eng did not identify the sender of the texts and did not read the text messages aloud. Lee Eng objected to the draft resolution’s “all caps” statement that Moos “DID NOT physically threaten Councilmember Lee Eng,” as an example. The council agreed to make changes.

Toward the 1 a.m. hour, a clearly frustrated Lee Eng made a statement. She started by saying that she had suffered a stroke years ago and had spent a “tremendous amount of time in rehabilitation learning how to speak again. I realize that I have trouble at times processing and articulating what I am trying to say. If everyone could be a little bit more courteous and patient, it would be a big help.”

Lee Eng complained of being cut off from speaking at council meetings and said comments made against her over the past six months “have made me feel alienated. … I have been continually marginalized by council members. … Why am I being treated differently? The only difference I can see is that I am an Asian female minority.”

Lee Eng explained the events of Nov. 24 this way: “The fear I experienced compounded with the difficulty of expressing myself may have led to a misunderstanding when I tried to convey the anxiety I felt after reading those texts from Kenan Moos.”

She centered much of her criticism directly on Fligor, whom she accused of siding with Moos and “dismissing me, canceling me. … I’m shocked that someone who claims to stand against racism apparently only stands against racism directed at your race. Neither you nor the other council members know what it is like to walk in my shoes.”

Fligor countered that she wasn’t judging and that she respected how Lee Eng felt.

“I dispute any notion that I only care about one race,” Fligor said to Lee Eng. “I have rallied against (Asian American and Pacific Islander) hate, and I mean it to the core, that it is wrong and unacceptable. … I think deep down you know me and you know that I do care, and I stand for all our communities.”

The mayor had expressed hope in achieving a unanimous vote in favor of the resolution to show common ground. But Enander and Lee Eng indicated early on their support was unlikely.

“Like everyone here, I want to see this matter resolved,” Enander said. “I have no assurance, however, that this document will achieve that. ... I tried to figure out what we could do differently to avoid such problems in the future. … That’s what leaders do. That’s what I want us to do here.”

Enander said the council should make clear that texts and other communications outside public comment during council meetings is contrary to council “norms” and could lead to violations of the Brown Act, the state’s open-meetings law. She added that such disruptions should be “dealt with right away,” in consultation with the city attorney – something that did not occur Nov. 24.

“In the end, what matters is whether Mr. Moos and Ms. Lee Eng can achieve some understanding of why each acted as they did, some understanding of how this whole thing went sideways and perhaps … some forgiveness,” Enander said. “Only the two parties know how to bring this to a resolution.”

Moos, however, supported the resolution.

“I did not ask for a resolution, but I did ask for a solution,” he said. “This resolution appears to be the only solution that will clear my name.”

The revised resolution is below. 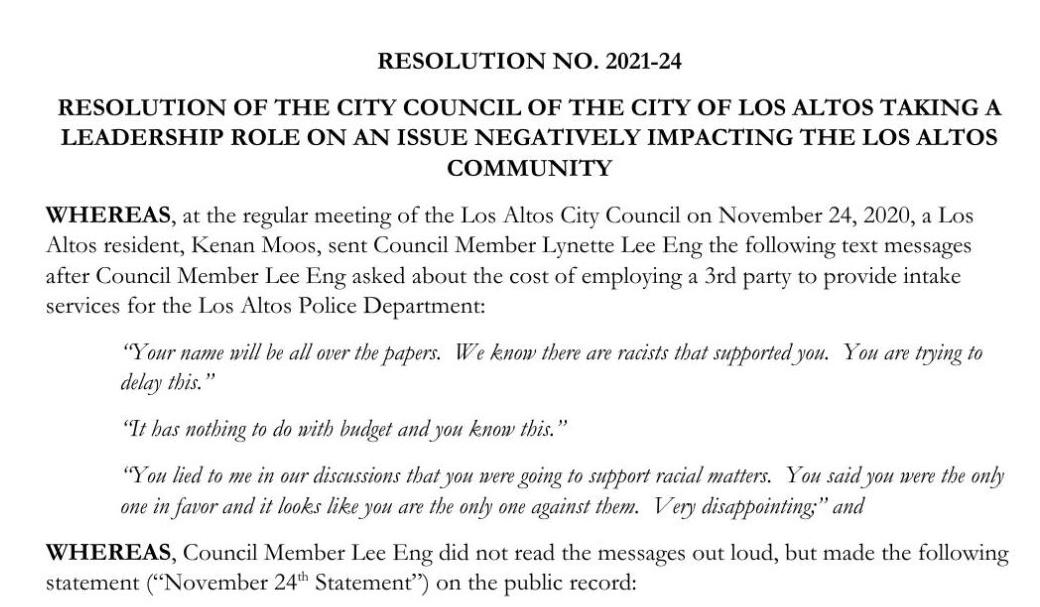